If Chelsea can be stopped right now then TFF thinks that Tottenham might be the team to do it.

It’s not only that they are on form and at home. But Tottenham’s high octane, hard running style may be a match for the imperious Chelsea XI.

But, having taken three points at Manchester City recently, no one would be surprised if Chelsea won here too and equalled the Premier League record, set by Arsenal, of having won 14 games on the bounce in the Premier League.

In general Chelsea’s record is incredible. They have won 16 out of their 19 games this season and already have a goal difference that some title winners haven’t exceeded.

And the injury list remains positive. John Terry might even make the bench for this one and although Alonso has a knock, we expect him to start what could be a pivotal game in the league title race.

Win this and Chelsea could be unstoppable. But if Tottenham take the points the gap is just six points to Liverpool and it could become one of the most hotly contested tittle races ever.

So here is the line up that TFF believes Chelsea will put out for one of the most eagerly anticipated games of the campaign.

Have a listen to the podcast to get a full preview and prediction for the game.

Chelsea fans: is this the team to demolish Spurs and can you even conceive of a different line up? 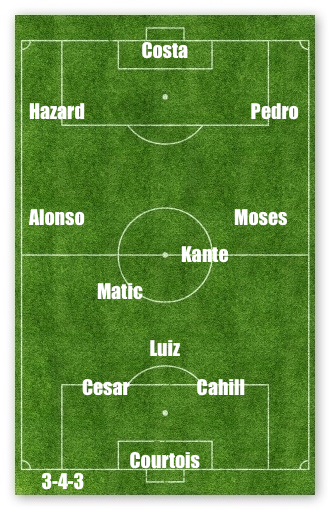