After serving one match suspensions in the game against Bournemouth on Monday, Diego Costa and N’Golo Kante will surely be expected to start again in a tough game against Stoke on Saturday.

They are possibly the two most important players in the team and although Chelsea did fine without them, they are a much stronger side with these two additions.

But the big decision up top is whether to play with Willian or Pedro. Pedro is on fire right now and scored a couple of goals against Bournemouth to cap a fine performance. But he’s suspended after 5 yellows!

Chelsea have loads of fixtures coming up and they may decide to stick with the brilliant Brazilian who played so well in the second half on Monday.

Willian can really consider himself to be one of the least lucky players in the Premier League right now because his form last season and this has been excellent but he just can’t find a way into the blockbusting Chelsea side right now.

Chelsea’s luck with injuries continues and only John Terry has any chance of missing this game.

So unless anyone gets injured in training through the week Conte has all but a full complement to pick from. Sooner or later Antonio Conte is going to have to freshen things up with so many games ahead but for now we think they might stick with the same side except possibly to play Willian on the right.

So here it is TFF’s strongest Chelsea XI to get three more points against Stoke and give themselves a chance of equalling Arsenal’s record of 14 straight Premier League wins, against Tottenham, a few days later. 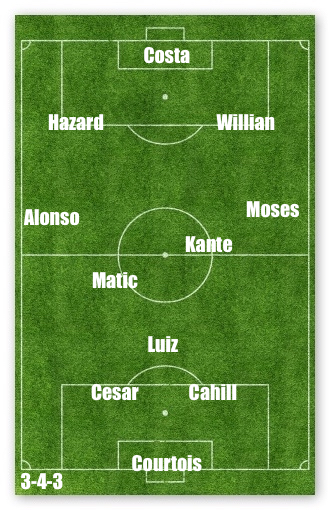