The international break – mercifully the last for four months – possibly came at the wrong time for Chelsea as they were absolutely on fire before it.

Their momentum may have been slowed by their time apart but Chelsea boss Antonio Conte now really appears to have the bit between his teeth and The Blues have to be considered as deadly serious title challengers at this point of the season.

With no European commitments they already look fresher than the rest and they will be desperate to build on the good work of late with more Champions League and Europa League fixtures for their competitors next week.

Going into this tough-looking away fixture Chelsea do have some injury concerns in relation to their A-listers.

Eden Hazard has picked up a calf injury and Diego Costa has been nursing a problem with his groin. Hazard is due back for the game but Costa’s immediate future is more cloudy.

If those two start we expect Chelsea to take three points from a plucky Boro side who have enjoyed better form of late.

But Chelsea fans will be sweating on those two because they have been instrumental in everything good about the team in recent weeks.

We are erring on the side of optimism for both and remember that the very able Michy Batshuayi is also desperate for minutes if Costa doesn’t make it.

Here is our XI to take the points. Chelsea fans: can you find a place for Willian? 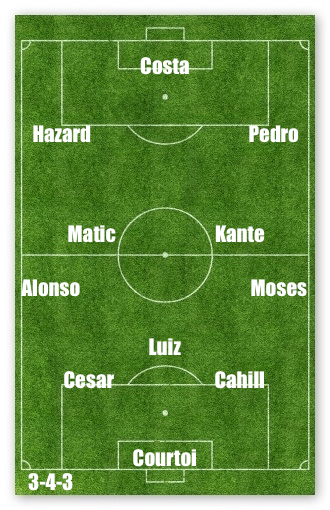