Chelsea visit Manchester City on Saturday in the early kick off in a game that leaves the mouth watering.

Just a couple of months ago many Chelsea fans may have feared such an opponent with Manchester City playing ridiculously good football under Pep Guardiola.

But, while City have stuttered before regaining their composure, Chelsea have been on fire. They son’t seem to be able to put a foot wrong right now and their comeback win against Tottenham at the weekend showed another side to this newly impressive outfit.

The Blues looked equipped to take on and beat any side right now but this will provide the ultimate its of their title credentials.

And perhaps they would be happy with a draw in such a tense game. But, based on the relentless drive of Chelsea’s new boss Antonio Conte, maybe he will go for the jugular and try to create a gap between themselves and the pre-season favourites for the title.

We certainly wouldn’t put such a result past a Chelsea side which has clicked immaculately over the last eighty weeks.

John Obi-Mikel and John Terry look likely to miss this one with slight injuries but they probably wouldn’t be required to start this one anyway.

So here’s our team and the Chelsea line up makes very familiar reading. 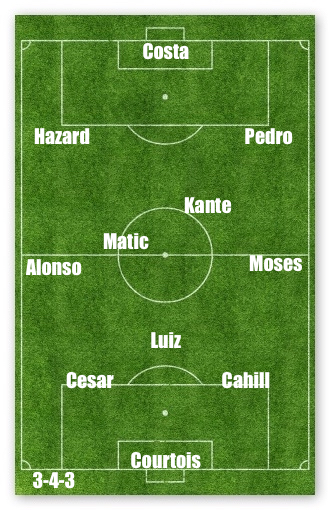