We haven’t been able to say this with any conviction for the last few years. But’s it’s all starting to look very settled at Chelsea these days.

Let’s not pretend that Antonio Conte was lucky to stumble upon this 3-4-3 formation.

Three at the back was always his intention and now that the players are adapting to the methods of the Italian the team is looking genuinely frightening.

A comfortable and clinical win away against a decent Southampton side spoke of a Chelsea team which is on top form but still coming together.

And, in Diego Costa and Eden Hazard, Chelsea house two of the genuine world-class talents in The Premier League.

So it’s all looking rosy again at Stamford Bridge and Chelsea’s next test will be to break down a well-drilled and stubborn Everton unit on Saturday.

The squad looks in great health and the only absentee, Cesc Fabregas, could be back in time for this one after a thigh injury. Not that he is likely to get a game at the moment and TFF suspects that, having had the best part of a week to rest, that The Blues will go with a very similar side that dismantled the Saints at St. Mary’s.

So here is TFF’s predicted XI with Willian starting instead of Pedro in what now looks like Chelsea’s strongest side.

Chelsea fans: would you start with Willian or Pedro? 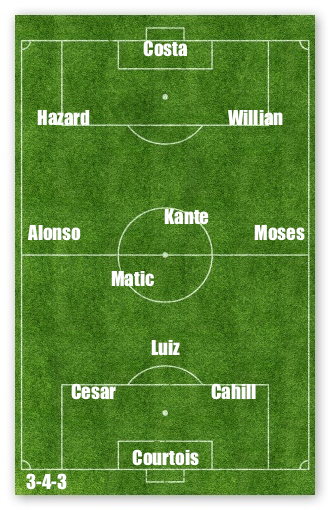