After a really up and down start to the season Chelsea seemed to click last weekend against champions Leicester.

No one seemed to know the best XI until then and it’s difficult to gauge how good a performance it was against a dodgy Leicester side who rested two of their better players in Mahrez and Slimani.

But David Luiz looked perfect in a defensive three and was allowed to ping the ball about to great effect.

And Eden Hazard played in narrower role which got him more involved in the game and brought a goal for the Belgian master.

So we should expect a similar side against Manchester United on Sunday. This will be an entirely different test of course. But if Antonio Conte really wants his Chelsea players to get used to this system then he has to employ it against the big boys too.

The 3-5-2/3-4-3 allows real flexibility. The mobile wing backs can defend and attack while the formation allows more bodies in the middle of the park. So the system should be suited to games against big opponents, when strength through the middle of the team is so important.

With all that in mind we expect Chelsea to stick with a similar side against Manchester United. Cesc Fabregas and Branislav Ivanovic should be fit again but neither seems particularly suited to a game of such intensity. The big question is whether Willian will return in time to take the place of Pedro.

So here is our Chelsea XI to take the points against Manchester United.

Chelsea fans: is this now your strongest XI? 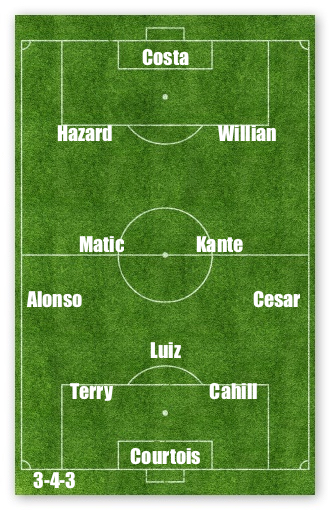