Chelsea made a few changes in midweek, to the side which has dominated games for the last few weeks. There was a welcome return to the starting line up for the likes of Willian and Oscar, who have been absent on compassionate leave for over a fortnight.

But their returns weren’t enough to see Chelsea through to the quarter finals of the EFL Cup against West Ham and, although they stirred in the second half, it was too little too late.

One would imagine that Antonio Conte now has a good idea of his best eleven. And big question marks remain over some of the big hitters.

John Terry returned to the fold but the back three of Cahill, Luiz and Azpilicueta has been superb and TFF thinks that this combination will return against a Southampton side which has pace up top.

Alonso and Moses will surely resume their duties in a 3-4-3 formation which has real defensive resilience but is genuinely frightening going forward.

And will Conte use his Brazilian contingent of Oscar and Willian? Well, although Pedro has been excellent, the all-round game of Willian could nudge the Spaniard out of the Chelsea side, depending on fitness levels.

Oscar may well have to settle for a return to the bench in the short-term as the forward players look so sharp.

So here is our XI and is it any surprise to you Chelsea fans who saw the destruction of United that there is only one change to that side? 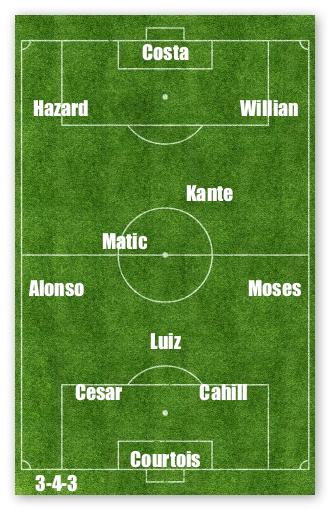