It didn’t click so well for Louis van Gaal in his time at Manchester United and there aren’t too many examples of the 3-5-2 working to great effect in The Premier League.

Liverpool probably did the best job of using it when Luis Suarez was at the club and they went oh so close to a title triumph – which came to a halt when Chelsea beat them at Anfield with the notorious ‘Gerard slip’.

But the track record of new Chelsea boss, Antonio Conte, and the apparent focus of his summer transfer business may suggest that we are going to see it at Stamford Bridge this term – at least at times.

Because reports continue to intensify about a Chelsea move for Romelu Lukaku. This comes on the back of the big money capture of Michy Batshuayi.

And let’s not forget that The Blues’ top scorer from last season, Diego Costa, is still very much available until we hear otherwise.

Three certainly doesn’t go into two but if Chelsea plan to go 3-5-2 this term, with two centre forwards, they will want at least one striker in reserve as they face another long and gruelling season.

The idea certainly throws up some interesting potential Chelsea XIs and the squad looks fairly well prepared for such an eventuality.

They may look to invest in another left or right wingback, depending on which flank Cesar Azpilicueta plays this season. But Willian would surely make a devastating wingback on the right, if asked.

But, other than that, we could see it happening. And, while the TFF jury remains out on the suitability of the system to The Premier League, we do have great faith in the abilities of Conte himself.

So here’s a stab at a 3-5-2 if Lukaku joins and if the club completes a much-vaunted deal for 6ft 5in powerhouse Kalidou Koulibaly.

Chelsea supporters: will it work? 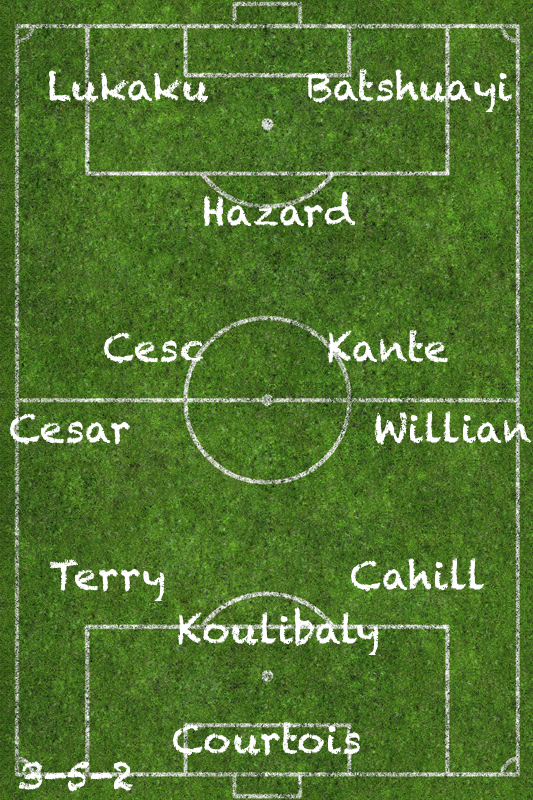