Everyone was talking about Manchester City as unbeatable a few weeks back. And, although their form has remained decent, draws against Celtic and Everton, added to defeats at Tottenham and Barca have changed things somewhat.

The Champions League scoreline on Wednesday didn’t exactly tell the whole story. Because, until Manchester City went down to ten men they were very much in the game.

But another Claudio Bravo error condemned Manchester City to an ultimate drubbing at the hands of the European masters.

Pep’s tactical mastery is not in question but his decision to only bring Aguero on for the last 11 minutes is curious.

This is, after all, City’s best player and Barcelona had a makeshift defence after Pique and Alba went off injured during the game.

In truth, very few teams in world football can expect to leave with any points when they lose a man at the Camp Nou.

So it’s just a case of looking forward now for Pep’s men.

Aguero will surely return for the weekend game against Southampton and we expect another quick start from the men in blue against an improving Southampton side.

City only have Sagna and Delph doubtful through injury and the latter may be available for this one.

But Pep will surely put out something close to his strongest line up as he looks to take the points in another home game against lesser opposition. We expect nothing less than a comfortable win for the Manchester team.

So here is our punt at an XI to get the job done. With so many good players it’s always difficult to predict a starting team but we think Pep will start strong for this one. 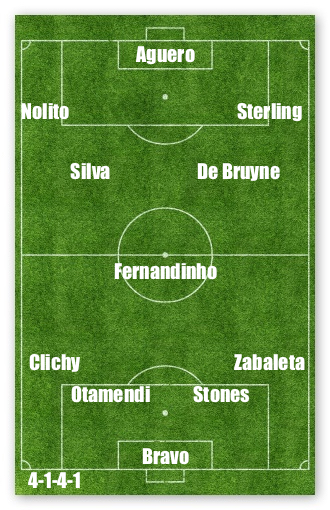