Arsenal can consider themselves extremely fortunate that the superb Sergio Aguero is still serving his three game suspension for this one.

But with Manchester City sharing the goals around – David Silva and Pablo Zabaleta scored against Watford in midweek – they seldom look starved of success in front of goal.

Indeed, this is a team which may not be serial winners right now but always creates a bucket load of chances in games.

Nolito played against Watford at number 9 and TFF thinks that he should keep his place. Becasue he offers the same sort of mobility as the Argentine talisman and that gives the Manchester City side a settled look.

Yaya Toure played again in midweek and at his age he can’t be expected to play every few days. But his big frame and even bigger presence would surely be preferable for this one and we are leaving him in there.

Gundogan was unlucky to get a worrying knee injury against Watford and no return date is set. The only other crocked star is Vincent Kompany who is set to return around January 2nd.

Fernandinho is serving a four match ban for his involvement in the fracas against Chelsea.

So here is our line up for a mouth-watering tie which takes place in Manchester at 16:00 on Sunday. Manchester City fans: is this the line up to take the points or would you rather have Kelechi Iheanacho up top and more mobility in midfield? 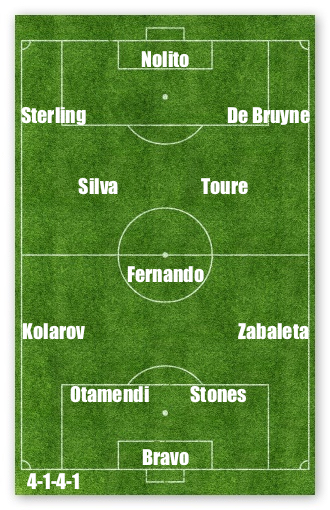