If this game had been played in the warmer days of autumn many to most football fans would have very much expected a home win.

With Manchester City binding spells on their opponents and Chelsea stuttering, a big win wouldn’t have been out of the question.

Liverpool will be keen to have a say of course, but two months on we are very possibly looking at the title winners in this Manchester tussle this weekend.

Such has been the speed and volume of progress at Stamford Bridge that they now look capable of overcoming any opponents. With their highly flexible and beautifully functioning 3-4-3 they seem able to mould themselves around any side and eventually get the better of them.

On their day Manchester City can of course beat anyone, but the smart money may go on a draw.

That result would leave City the more disappointed of the two sides and they will surely have a go to try to make home advantage count. As usual, the first twenty minutes will be crucial and if Manchester City can get ahead we could be talking about a seminal day in the title race.

Raheem Sterling and Fabien Delph have a fighting chance of being fit for this one but perhaps the expected pace of the game may mean a bench role for both or either. Sterling may not be fully match fit but his speed could come in handy in the last quarter of the game.

So here is our XI for what has to be billed as the must-watch game of the weekend.

Manchester City fans: is this the side to do the requisite damage? 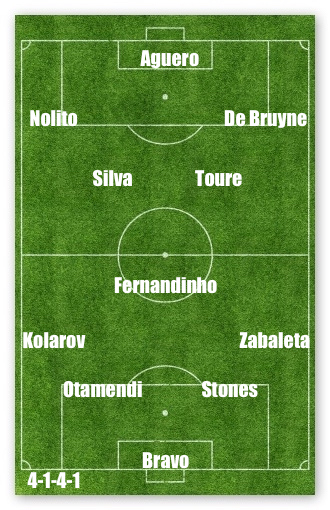