It’s hard to know where to start with Manchester City at the moment. They are as mercurial as teams come. Scintillating one week and embarrassing the next.

The Achilles heel? Well the defence has lacked the consistency of the forward areas and more surgery will be needed in the summer to rejuvenate those wide areas with some jet-heeled adventurers. And it may well be time to make a serious effort to replace Vincent Kompany with a fit and world-class partner for the coltish John Stones.

But there is also a sense that Manchester City manager Pep Guardiola carried on tinkering in the autumn when his team was playing so well that many a manager would have got the pipe and slippers out.

It seems to TFF that the arrival do Gabriel Jesus could not have come at a better time. He may not be guaranteed a start every week but his pace and flair are going to cause serious problems to the opponent and he will give the dressing room a lift and add options up front.

TFF would have him in there from the start every week ahead of Raheem Sterling on the left of the front line. From that position he can float inside and cause havoc with his eye for goal and dribbling skills.

It’s a really tasty addition and one that we feel will propel Manchester City into the Champions League places by the season end.

Only Ilkay Gundogan is properly injured at the moment. Sergio Aguero has a slight knock but should be good for this one.

So here is TFF’s bewitching XI to win the points in a tough trip to West Ham. Manchester City fans: would you start Jesus? 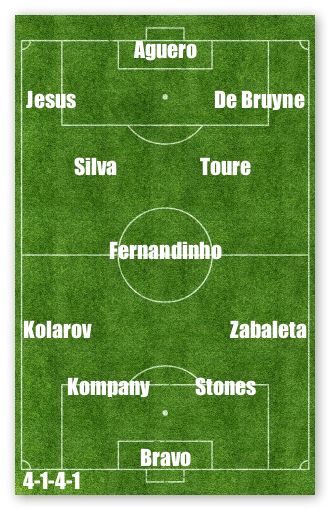