Since Jurgen Klopp took charge at Anfield Manchester City vs Liverpool has been the game that TFF has looked out for in the fixture list more than any other.

Because these have been the two most exciting attacking units for some time. While Chelsea look like the best team overall at the minute, Manchester City and Liverpool are the finest that the Premier League has to offer in terms of going forward.

Manchester City have steadied the ship after a bit of a recent wobble and started beating teams comfortably once more.

With Sergio Aguero back from suspension Pep Guardiola will hope that City continue to release the handbrake and show what they can do.

Playing away at Liverpool is no easy task of course but three points would send a statement out the whole Premier League.

Gundogan, Delph and Kompany will remain sidelined for this one. John Stones got a knock and was replaced early against Hull and may not be quite ready to start a game of such intensity.

It’s a virtually impossible one to call but many would sit on the fence and say that a draw could suit both ahead of the spring title surge.

So here is our best Manchester City to stay solid at Liverpool but also offer more than enough to score goals on the counter.

City fans: can you take all three points with this side? 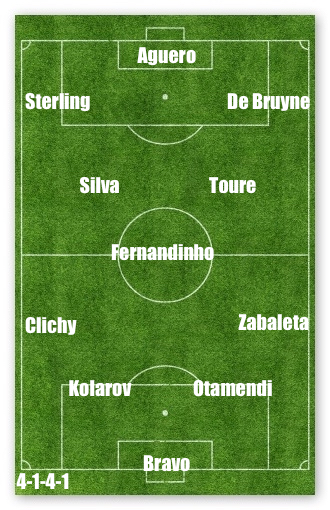