Manchester City have ridden the storm of bad form and now look back in the groove after some convincing wins in the league which have firmed up their position in the top four.

With seven games for Manchester City still to play there is still fierce competition for those top spots.

Barring implosion Chelsea and Tottenham look safe as the top two so City are realistically battling with Liverpool, Manchester United and Arsenal for those last two magical spots which will bring Champions League football next season.

They are well placed for a top four finish but need to keep picking up points and Southampton will not be a straightforward game by any means.

The Saints have steadily improved this season and look like a strong prospect at home.

But Manchester City have such a powerful squad and while they have three injuries to important players – Gabriel Jesus, Ilkay Gundogan and Bakary Sagna – they can field a bewitching XI.

TFF does have concerns over the continued absence of Gundogan. he has been excellent when fit but we wonder whether he has just swapped one physio room for another since his move from Dortmund. We hope he can get back to his best next season because he is a wonderful talent.

Southampton may well be weakened by the absences of Boufal, Van Dijk and Davis so they are without some of their better players and Manchester City must take advantage if they want to start sealing the deal for top four.

So here is TFF’s best Manchester City XI for the game and we have gone with Sane instead of Sterling. 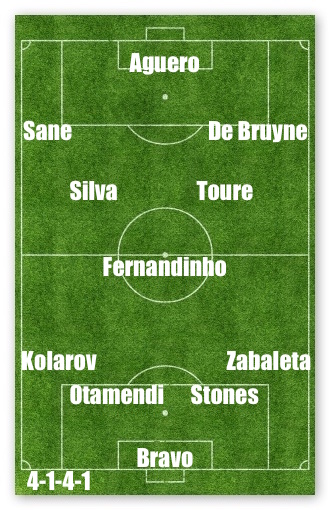