Manchester City were being heralded as a different class to the rest by much of the media in September.

It’s a testament to the depth of the Premier League that a club with this much money and a manager as good as Pep Guardiola has come unstuck in recent times.

And wouldn’t it be so boring if Manchester City had run away with it before Christmas?

As it is, we fully expect City to be in the title race right up until the end. It just won’t as straightforward many suspected when Pep’s boys were battering all comers in the autumn.

What we can expect is a return to winning ways for Manchester City after a couple of painful defeats.

Sergio Aguero is banned until boxing day but City have more than enough firepower to cope without him and, despite the defeat to Leicester at the weekend, we are expecting a quick return to form.

Iheanacho is an excellent understudy for the Argentine and TFF picks him to start again in a game which should be almost one-way traffic. And the big man, Yaya Toure, should be brought back into the side to offer that effortless incision in attack.

Only Vincent Kompany is injured so Manchester City have a healthy complement from which to pick a team. Pep will be particularly concerned about recent defensive lapses and perhaps we should expect another splurge on the back five in January.

Here is TFF’s Manchester City XI to dismantle a workmanlike Watford side. 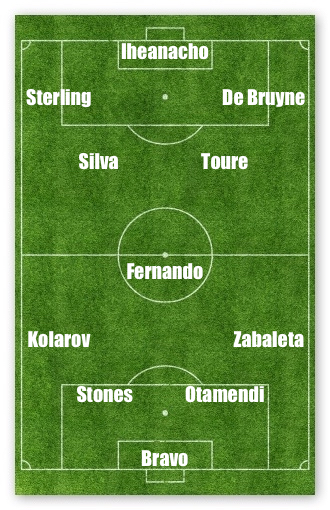