It’s been a really rollercoaster season for Manchester City who will end the campaign empty-handed in Pep Guardiola’s first term in charge. So much was expected from the Spanish maestro but it seemed at times in the season he over thought his selection and tactical strategies. After a bewitching beginning to the campaign Manchester City lost some ground in the title race and never recovered.

But they have come on really strong over the last couple of months and cemented their place in the top four. Another win against West Brom at home on Tuesday night should put them in the driving seat for Champions League qualification next season.

But West Brom never provide easy opposition and they will park the bus at the Etihad as they attempt to get away with a draw even though they have nothing left to play for this season.

Manchester City have several injuries but they might be able to count on the services of John Stones who has a groin strain. Delph, Bravo and Gundogan remain sidelined longer-term.

We fully expect Manchester City to go on and beat a stubborn West Brom side – perhaps it won’t be that much of a cricket score but three points in the bag and a giant step towards that crucial place in next season’s top table of European cup competition is all City care about.

Here is how we think Manchester City will line up. City fans – is this your best 11 to get past West Brom? 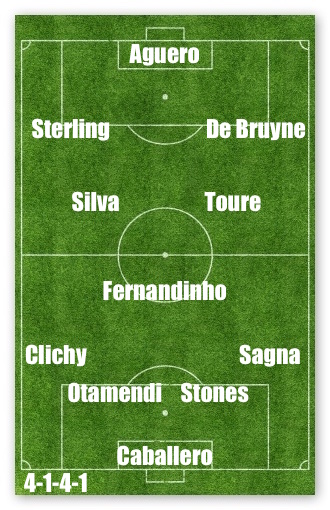