With just a quarter of the season gone this already feels like a crucial encounter for both teams.

With Manchester City stuttering and Manchester United abject, preseason predictions of a two-horse NW title race seem silly and it’s a case of back to basics for both.

They are top of the league and playing flowing football but can’t convert their chances. Defeat at Old Trafford for either side will bring increased frustration. If it was a league game a draw would suit both but there has to be a winner on Wednesday which should make for fascinating viewing.

Kevin de Bruyne is the only real doubt from Manchester City’s A-list as Pablo Zabaleta should recover in time to be available for selection.

De Bruyne’s injury seems to just be a knock so we should perhaps expect to see his industry and class from the start against United on Wednesday at a ground where he did so much damage earlier in the season.

Both clubs are desperate for a win to alleviate their current concerns and this one is quite literally impossible to predict.

But it’s a must watch encounter and Manchester City will go their rivals with attacking intent as always.

Here’s what TFF thinks could be the City XI for a belter. Manchester City fans: will this XI win the tie? 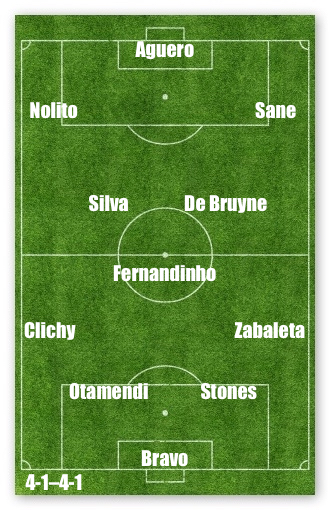