Not only do we now find ourselves at the tip of the Christmas fixture list but there are some absolute humdingers in store in the festive season.

Arsenal were involved in a titanic clash with Everton in midweek and both sides have more massive games this weekend.

While Everton play Liverpool, Arsenal travel to Manchester City who will also be licking their wounds after recent reverses.

Both teams are still well and truly in the title race but they will want to pick up the pace again this weekend.

While Arsenal might be happy to leave with a draw against a club with bottomless pockets Manchester City will surely go for this one to make a statement after the defeat at home to Chelsea last weekend.

Arsenal will be helped by the absence, through suspension, of the deadly Sergio Aguero but they have injury concerns of their own to deal with.

Mustafi, Debuchy, Cazorla, Akpom, Mertesacker and Wellbeck will be sidelined for this one. Meanwhile, Aaron Ramsey could make a return to the sqaud after a hamstring injury.

But Arsenal will still be able to put out a near full strength side and will always be dangerous on the counter with the likes of Walcott and Sanchez looking for loose balls on the half way line.

So TFF is going with pace for this one. Elneny could come in to the midfield as he did against Manchester United at Old Trafford. But we would sooner see Xhaka partnering the excellent Coquelin as he has more to his game than as a simple destroyer.

Here is our XI to take at least a point at City. Arsenal fans: would you make any changes? 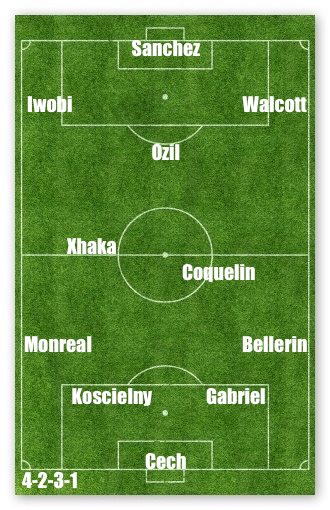