It seems likely that Arsenal will buy one or two more players before the window closes, with a centre back and a centre forward needed – as we always say about this time of the year.

But Arsenal manager Arsene Wenger does seem intent on signing reinforcements, particularly since Per Mertesacker suffered a long-term injury during the summer.

The best case scenario at this point would perhaps be the signings of Alexandre Lacazette and Shkodran Mustafi. Those two would expect to strengthen not just the squad but the first XI.

But, as things stand, we shouldn’t forget that Arsenal already have a strong team.

They have options everywhere but in defence and they will give any opponent a proper game.

And they will have to start quickly because they have a rather wonderful opening fixture against Liverpool at The Emirates on Sunday 14th August, kick off 16:00 GMT.

Arsenal have injuries to the aforementioned Per Mertesacker along with Jack Wilshere, Danny Welbeck and Carl Jenkinson.

So what will the team look like for the opening fixture?

Olivier Giroud should start up top despite returning late to training after his summer exertions.

Behind him Mesut Ozil and Alexis Sanchez will start.

In defence we know that Nacho Montreal, Laurent Koscielny, Hector Bellerin and Petr Cech are in. So we just need to fill in the blanks.

Perhaps the most contentious area of the team is in the engine room where Wenger can choose from Francis Coquelin, Granit Xhaka, Aaron Ramsey, Mohamed Elneny and Santi Cazorla.

So here is our attempt. Arsenal supporters: any changes for you? 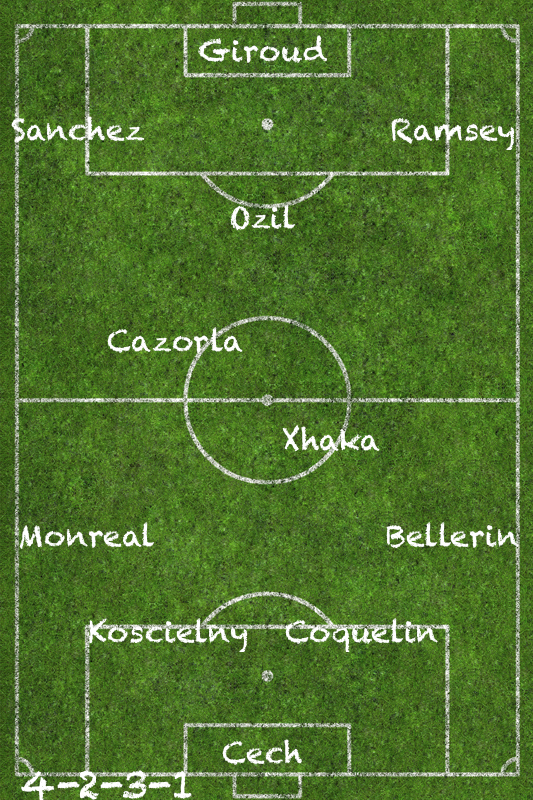