So much has been made of the form of the likes of Chelsea and Liverpool this season that Arsenal have gone somewhat under the radar.

They have spent so many seasons flattering to deceive that perhaps they now have the perfect cover to spring their most serious title challenge for a decade.

Chelsea look so convincing right now but will surely have a dip. Liverpool’s results have slowed of late with a defeat and a draw in their last two.

But Arsenal are winning with quiet efficiency.

They have dealt with the loss of Santi Cazorla, which many thought would be a season wrecker, and a defeat of Everton at The Emirates on Wednesday will put them firmly in the leading pack, with others trailing in their wake.

Injuries could be the biggest danger for Arsenal right now as the more players are crocked, the more strain is put on the fit ones. Mustafi has picked up a knock and Mertesacker and Debuchy are still out so Rob Holding may be called upon to continue the impressive start to his Arsenal career.

But Arsenal seem to have more than enough cover for Cazorla with Aaron Ramsey now fit and looking to once more cement his place in the squad.

So here is the team that we think can take three points against a stubborn if currently underwhelming Everton side. 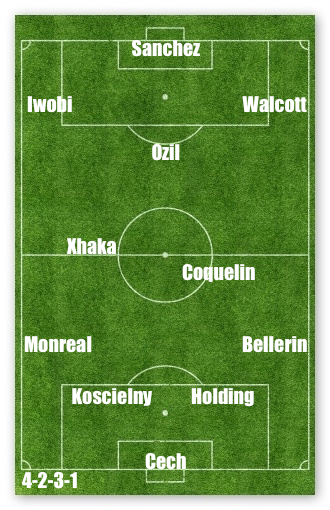