We have to admit that we fully expected Manchester City to come out on top against Arsenal in the FA Cup semi-final at Wembley on Sunday.

Too often in the last decade Arsenal have been decent against mediocre opposition but come up short in those sorts of games when they’re playing against real quality.

But they showed the required mettle at last and will look to take this into the next match – a tricky tie against a rejuvenated Leicester side.

We saw Leicester underperform massively in the league however this season and with the Champions League now out of the way and Premier League safety looking likely perhaps they are going to take their foot off the gas once more.

Arsenal have injury concerns over Alex Oxlade-Chamberlain, who will undergo a late fitness test, to assess whether he’s ready for this one. But centre back Mustafi looks as if he’s going to be out until the weekend at least. Apart from that Arsenal have a decent complement of players to pick from and they should see themselves over the line in this one despite facing a plucky Foxes side Who were absolutely marvellous in Europe this season and showed that they have real quality when they get their A-game together.

So here is the XI that we think Arsenal should pick if I want to win this one and if they do then we see them taking the three points in a fairly tight game. 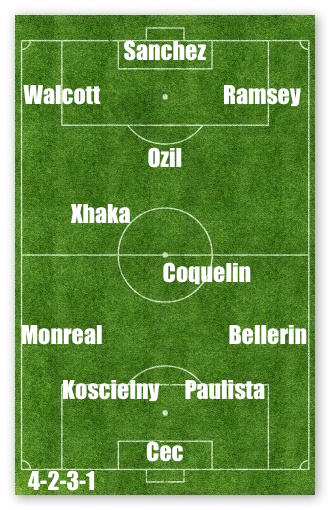