The last thing Arsenal need after an opening day humbling at home to Liverpool is a tough away day at the champions, who are themselves licking their wounds after losing their first game of the season to Hull.

Another defeat for Arsenal would be unthinkable but Leicester will be desperate to banish memories of their demise at Hull at the weekend.

So it’s all set up for another titanic clash and TFF thinks that Arsenal will be lucky to escape with a draw – particularly if they have to select the same defensive line this weekend.

Thankfully for Arsene Wenger et al their best defender, Laurent Koscielny, has a fighting chance of making this game and what a crucial addition he could be.

Because while Arsenal continue to haggle over price for other additions this man can make all the difference to a young and inexperienced defence. Rob Holding did OK but Callum Chambers was culpable for at least one goal and hasn’t yet kicked on in his senior career.

But Aaron Ramsey, Iwobi, Pualista, Mertesacker, Welbeck and Jenkinson all remain sidelined. Jack Wilshere made the bench at the weekend and we will hopefully see increasing minutes for him over the coming weeks.

What we do know is that Arsenal are capable of going to Leicester and beating them comfortably – their attack is still something to behold in full flight. But they need more defensive solidity on which to build.

Mesut Ozil may also come back into the fold for this one after an extended summer break due to EURO 2016.

So here is our line up for what already seems, somewhat absurdly, to be a crucial match for Arsenal in terms of their title hopes. Because if they go 6 points behind the leaders this weekend they will have a mountain to climb. 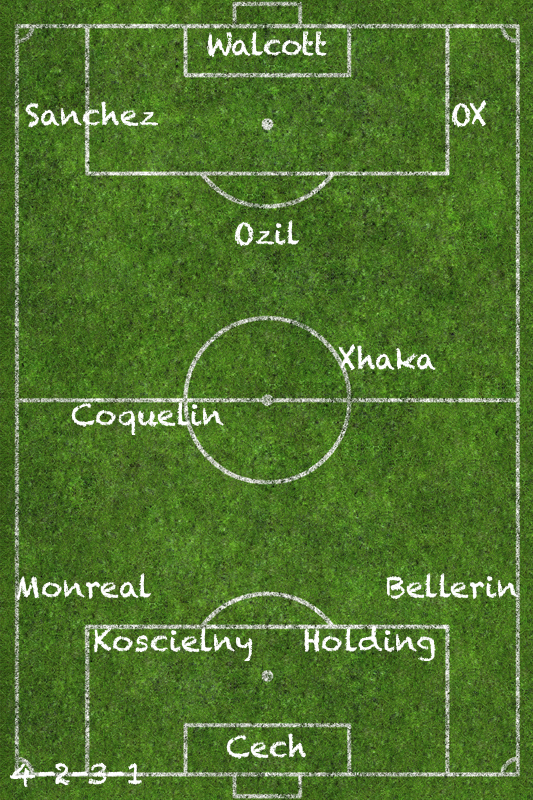