It’s quite ironic that Arsenal striker Olivier Giroud was seen by some as the weak link last season as his lack of pace often left Arsenal looking toothless up top.

But he’s been an absolutely crucial element this season and mainly off the bench. Giroud did start the game on Monday but his real impact was once more felt at the end of the game and with just four minutes left The Gunners took three crucial points against a typically stubborn West Bromwich Albion side at The Emirates.

All of a sudden Arsenal look as if they have extensive injury problems. But a deeper look at the list reveals less concern.

Of the eight currently on the injured list Theo Walcott and Alex Oxlade-Chamberlain could well return for this one, and Mustafi is just behind them in terms of fitness after a substantial time out of the game.

Another long-term absentee, Per Mertesacker, will be fit by the second week of January and the extent of Kieran Gibbs’ knee problem is yet to be fully revealed.

Most importantly, the only A-lister that is currently sidelined is Santi Cazorla who may not be back until the end of February having suffered that plantaris injury.

Sam Allardyce will make Crystal Palace harder to beat and this game could look very much like the WBA one.

But like that game, we fully expect Arsenal to come through to take the points.

Here is our Arsenal XI and, having won the game for The Gunners on Monday, Giroud has to keep his place up top with Walcott still doubtful.

Arsenal fans: Would you start the Frenchman? 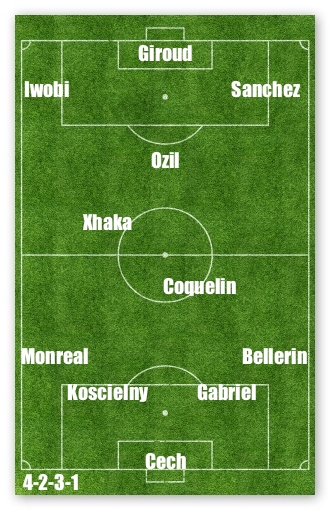