Arsenal fans will at least be relieved that two more bodies were brought in before the end of the window, to take the transfer spend close to £100m.

In Shkrodan Mustafi Arsenal have signed a technically good and mobile centre back who can form a great partnership with Laurent Koscielny for some time to come.

The signing of Perez is more contentious. Some will argue that Arsenal still haven’t brought in the top quality striker who can turn the title race in their favour.

But Perez is a very quick player and that is the type that Arsenal need up top. He can also operate on the left of a 4-2-3-1 and we expect to see him there at times this season.

But TFF is throwing him in at number 9 in The Gunners’ strongest starting XI, in hope as much as expectation of a bright new dawn.

The three behind Perez are difficult to pick because Arsenal have so much quality there. Mesut Ozil and Alexis Sanchez have to start. You can pick any one of The Ox, Walcott, Ramsey and Cazorla for the wide right berth.

And defensive midfield also looks as strong as at any time of late with Coquelin, Xhaka, Wilshere and Elneny battling it out for two spots in the side.

With all this in mind, TFF has picked what it believes to be Arsenal’s strongest XI with the window closed and all the transfer business now confirmed. Arsenal fans: is this now the strongest side that Arsene Wenger can field? 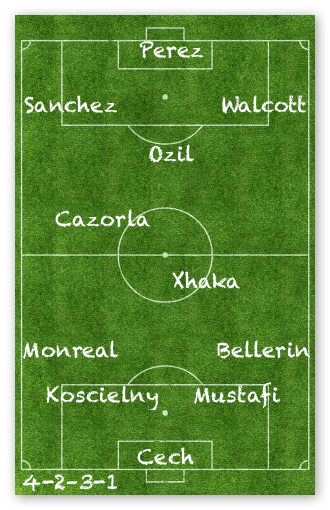