Manchester United have been rather pony in the Premier League so far this season and perhaps, in Jose’s first term, the fireworks are going to continue to occur in the cup.

Because, while there is no doubt that Manchester United are showing signs of improvement, their best results have come in the Europa League and the EFL cup.

They scored four against Feyenoord in their last European outing and a draw in this one will see them through to the last 32 in this marathon of a competition.

TFF and many onlookers had strong suspicions for some time that Anthony Martial and Henrikh Mkhitaryan were two of Manchester United’s best attackers but is has taken a while for them to cement their places in the side.

Jose might be tempted to tinker again but it would surely be good, at this stage, to try to get some momentum with a strongest XI.

And that XI seems to be coming together. With Eric Bailly back in the squad at the weekend we may well see him return alongside Phil Jones in the defence. But Marcos Rojo will take some shifting after a superb run in the middle.

Jose may not play his strongest side against the Ukrainian minnows but we would like to see this team come out and put the opponents to the sward as well as gathering some momentum for the league game against Tottenham on Sunday.

Here is TFF’s strongest XI. United fans: is this now the best team Mourinho can put out? 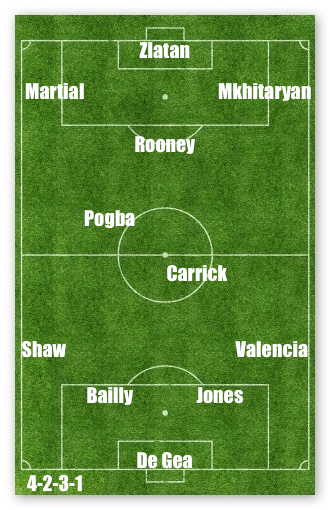