Let’s not pretend that it would be easy to fit Diego Costa and Alvaro Morata into the same side. While Morata is a clever and two-footed player who could probably do a job in the hole, he doesn’t have the pace or engine to effectively play as a winger and typically starts up top.

So unless new Blues boss Antonio Conte is planning to play a 4-4-2 next season then we wonder whether Diego’s departure is inevitable. Lest we forget, Costa had a torrid season with the Chelsea faithful, some of whom blamed him for Jose Mourinho’s ultimate sacking.

Alvaro Morata has been strongly linked with a move to Chelsea, with some reports suggesting this week that Conte is trying to make the move happen.

While he hasn’t been a prolific goalscorer for either Real Madrid or Juventus, he is still young and does tend to score important goals in big games.

Another player who has been through the Chelsea rumour mills of late is Leicester’s N’Golo Kanté. The tireless French international has come on in leaps and bounds this season and his performances led Leicester’s head of recruitment, Steve Walsh, to comment:

“No matter who we are playing, we play 3 in midfield.

Drinkwater in the middle & Kante either side.”

With these two in the side Chelsea would have a younger and more solid look about their spine. Nemamja Matic has been out of sorts and his future is the subject of speculation too. One way or another, a big departure this summer may be inevitable.

Another main piece of Chelsea business will be to hold on to their best players such as Thibaut Courtois, Eden Hazard and Willian. Providing they do that they should look pretty tasty again come August.

So based, on no major departures other than Costa, here is how Chelsea could line up come August. And wouldn’t it be something if Conte were able to persuade his old charge Paul Pogba to join him in The Premier League?

Blues fans – would this team be more complete and dynamic than the one which played so meekly at times last season? 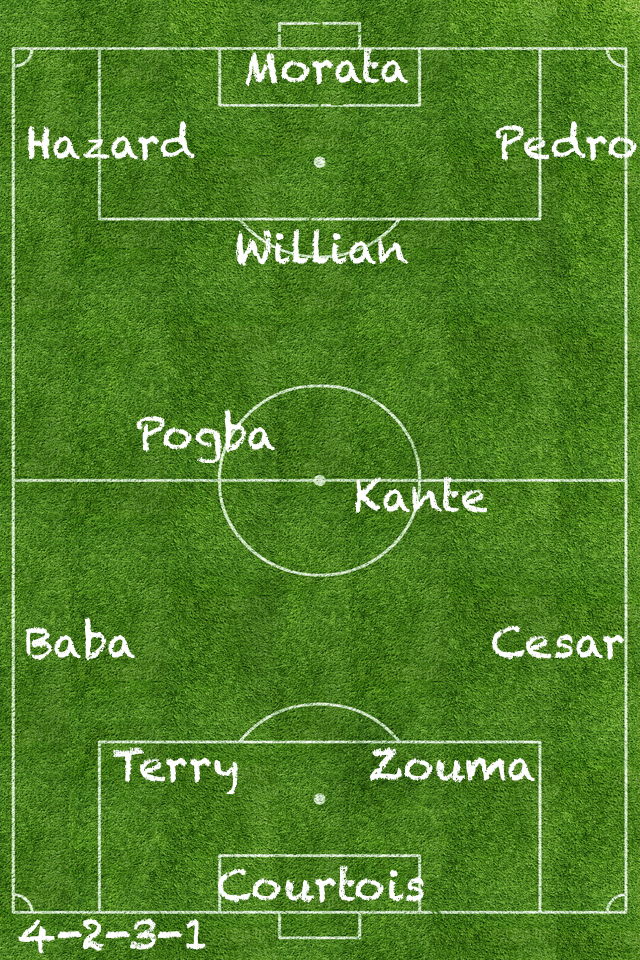