The signing of David Luiz shocked the world of football and it’s easy to imagine that there was an air of desperation about proceedings on transfer deadline day. Even at £34m the mercurial Brazilian, who is now 29, is on the expensive side.

But with transfer fees inflating beyond all recognition we should think less of the money and more about whether the player will improve the team.

And apart from the odd defensive lapse, Luiz will bring power, athleticism and personality to the back line. So he obviously goes straight into the first XI.

As does the other deadline day signing Marcos Alonso. TFF assumes that Cesar Azpilicueta will move over to the right and Branislav Ivanovic will be used more sparingly and perhaps in the centre of defence on occasion.

N’Golo Kante is already proving to be the envy of The Premier League with his unbelievable energy in midfield. Any side with him in it will go close to the title – and Chelsea don’t have any European distractions to fatigue their squad so they will surely be there or thereabouts come May.

Another A-list striker didn’t arrive but new signing Michy Batshuayi has hit the ground running and Diego Costa is settled for now.

So, with all this in mind, Chelsea have a super looking first XI. Whatever you think about Luiz, he is a defender who can win matches and looks over the moon to be back in London. So it could turn out to be a real coup for Antonio Conte. 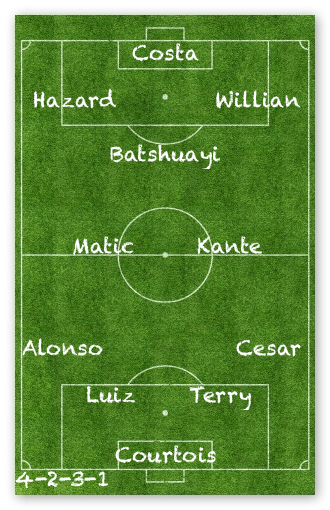