Leicester have looked stronger of late after a poor run of results which left many wondering quite how far they would plummet this season.

And while it’s been a very challenging start to life at Stamford Bridge for new Chelsea manager Antonio Conte, The Blues are still only five points off the pace, one behind Manchester United and just three behind Liverpool and Arsenal.

So a good run of form will see them return to the top echelons of the league. The problem is that Conte still doesn’t seem to know his very best team.

CHECK OUT OUR WEEKLY PODCAST

TFF thinks that Michy Batshuayi needs to start. His pace off the bench is clearly useful. But he is a livewire player who will inject dynamism and speed into the attack.

Diego Costa will obviously play when fit but Victor Moses is possibly crocked for this game, leaving a space in the 3 behind the Spaniard.

TFF would play Batshuayi at number 10 and let him rove and drive forward with the ball. He will cause all sorts of problems if he is given the freedom to create and attack.

John Terry could be back for this one and TFF is erring on the side of optimism in terms of his selection.

So here is our strongest XI for Chelsea vs Leicester and we feel that Michy should start. 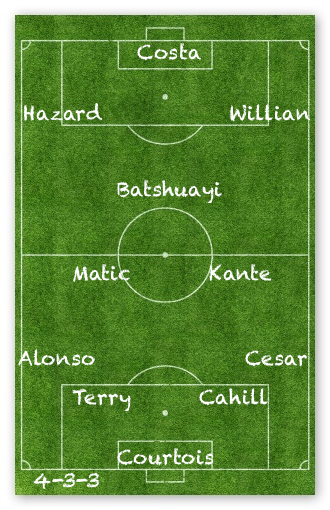