Chelsea just about got over the line against West Ham in what turned out to be a rousing debut victory for Antonio Conte.

This current, powerful incarnation of The Hammers would be no one’s first choice opponent for a new manager in a new season but Chelsea were fortunate to have home advantage for this one and it took a last minute goal from Diego Costa to secure the points.

Costa looked on his way for much of the summer but there is absolutely no doubting his ability and importance for the team – even if he was lucky to stay on the pitch. And not for the first time in his Chelsea career.

This team is clearly still a work in progress for the new Chelsea boss and he will perhaps hope for one or two more signings before the window closes.

But there were really positive signs too. Costa has hit the ground running and Eden Hazard seems to have awoken from his 9 month slumber.

Unless Antonio Conte surprises us with some new injury news in his next press conference then the injury list looks mercifully short with only Marco van Ginkel and Kurt Zouma crocked.

The big selection decision that Conte has to make is whether to use Michy Batshuayi from the start. The new, big money signing made a decisive impact when he came on the park to set up the winning goal and he has the sort of pace and penetration that can only help Chelsea.

But perhaps Conte is likely to stick with a winning formula on this particular occasion.

So this is our punt at Chelsea’s strongest side for a tough away trip to Watford. 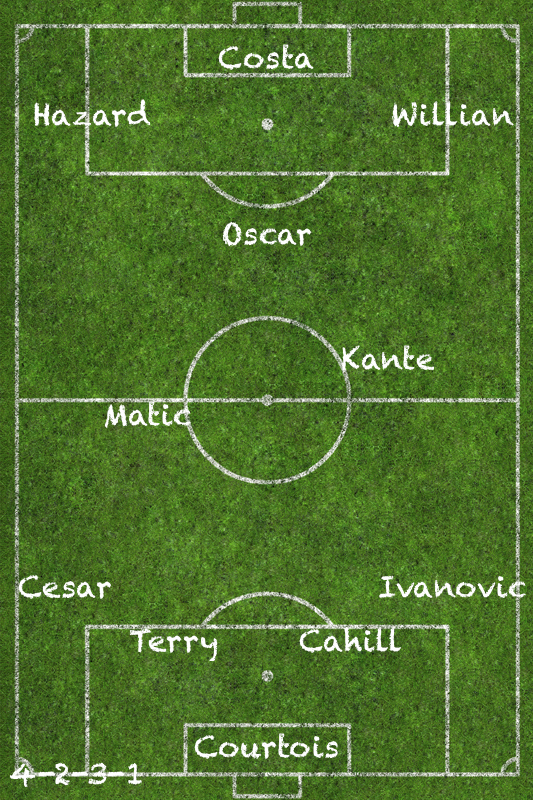