With an immaculate qualifying campaign behind them it is rather strange that Roy Hodgson almost looked as if he was starting from scratch in his warm-up games.

That isn’t the case but it looks that way because of the impossible to ignore emergence of Jamie Vardy and Dele Alli. The main problem for Hodgson is that he has two top number 9s in Vardy and Harry Kane and he will probably get slaughtered if he doesn’t start with both.

But Vardy looked ill-suited to his position on the left of the attack against Portugal and the system is also struggling because Alli and Rooney want to use the same areas of the pitch.

So the big question is does Roy squeeze all of his form players in to the side or go with a system that the players are more comfortable with and drop the likes of Vardy?

We believe that he can have the best of both worlds by simply dropping Wayne Rooney into the midfield. England lack a top passer of the ball in the engine room and Rooney can be that man. It was just like watching Paul Scholes in Manchester United’s last few games of the season as Rooney pinged the ball around the park with almost impossible precision.

He probably wants to play further up the park for England but Alli is so much more effective at number ten, where he can also enjoy that almost telepathic understanding with Harry Kane. Hodgson isn’t paid millions of pounds to overlook such obvious partnerships and we are hoping – nay, praying, that he sees the obvious solution in time.

The only controversial part of our system is that we are shipping Vardy and Sturridge out wide but in a formation which will often look like a 4-3-3. But Vardy will play on the right and Sturridge on the left of a narrow front three in which every player will be able to exploit their stronger foot. If it doesn’t work against Russia then the simple option will be to play Sterling and Rashford on the wings and leave Vardy and Sturridge on the bench – but keeping the system intact instead of confusing all involved with constant tinkering. The two youngsters should be used off the bench anyway, to cause havoc with their pace in the last half hour of games.

This team is uncluttered. It allows Alli ample space to roam in the hole and supply those lovely passes to a thirsty front three of Sturridge, Vardy and Kane. And it gives England a top distributor from midfield in the shape of Wayne Rooney, who no longer has the pace to compete with the other three forwards. And pace will be crucial in EURO 2016.

This system is so obviously the best use of England’s talent that Three Lions fans have every right to despair at Roy Hodgson if he doesn’t employ it. It’s an attacking kine up but it needs to be because England’s current strength is in attack and not defence.

England fans: is this the best XI and formation for EURO 2016? 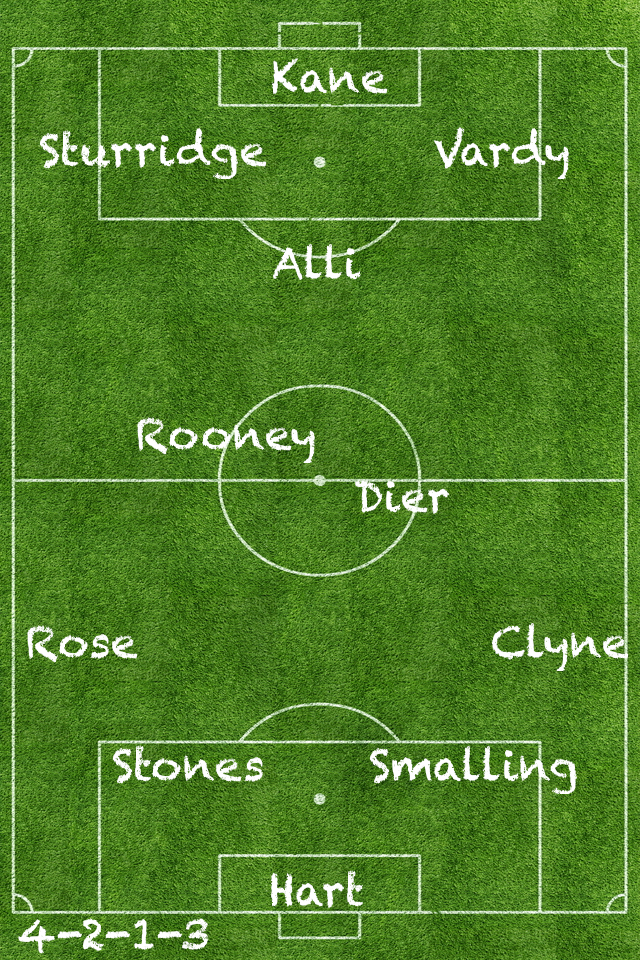