It’s been a really interesting transfer window for Everton and although there was disappointment in relation to Moussa Sissoko and other targets, there was at least serious intent in heavy player investment which looks as if it will continue over the next two or three windows.

John Stones left for big money but Funes Mori and Williams will provide an excellent foundation at the back for Everton this season and The Toffees also have Phil Jagielka in reserve.

In midfield the capture of Idrissa Gueye could be key and we will monitor his form with interest. For now Gareth Barry stays in our XI but that could change when Gueye gets settled and Besic returns from injury.

Further forward we think that the loan capture of Enner Valencia will prove popular with Everton fans. He’s a good striker but can also play wide and TFF can imagine him bombing up the right wing to good effect. Romelu Lukaku will enjoy great service from Valencia and Bolasie who can both come inside and form a three pronged attack.

We are going to play Bolasie left and Deulofeu through the middle where he can cause havoc. This leaves Ross Barkley in a deeper role in the engine room, where we believe his power and thrust will be well utilised.

With all that in mind we have gone for something of a cavalier choice and used no less than 4 new signings in our strongest XI.

Everton fans: is this the best team you can put out at present? 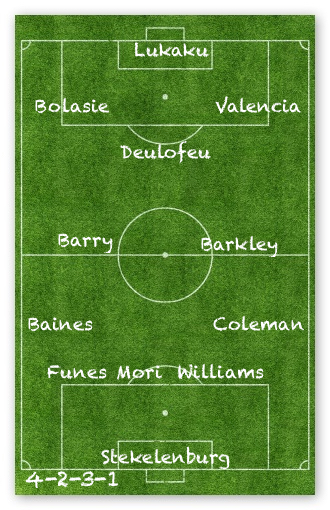