Anything can happen in the Premier League from week to week. But, with Everton’s tireless pressing and their efficacy on the counter against Arsenal, there was a sense that The Toffees are starting to come good under Ronald Koeman.

Even before the brilliant and at times contentious win at Goodison on Tuesday Everton weren’t in a terrible position. And fans who expect instant success from a new manager are usually asking for way too much.

TFF has always backed Koeman to succeed and if he can get another win in a huge game, this time against Liverpool, at the weekend then Everton will be flying.

Phil Jagielka was sent off and will consequently miss the derby. But Everton are fairly well equipped at the back and will not be too worried about cover.

The injury situation remains stable with Yannick Bolasie, Basic and Pennington on the long-term injured list.

TFF thinks that Enner Valencia provided excellent thrust and industry in attack and if he can cope with two big games in a week then he should start again and we would like to see Gerard Deulofeu replace Lennon on the left.

This game is crucial for Everton because another good result will bring no end of confidence. A defeat to their biggest rivals and the Arsenal game will feel like something of a freak performance. 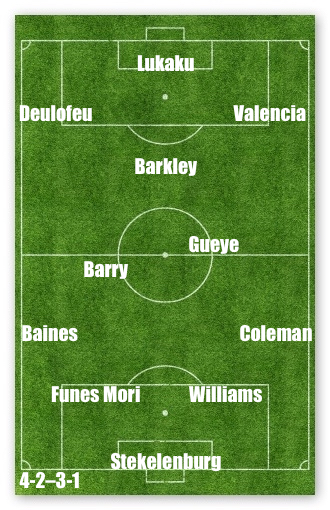