Time is always the ultimate judge but TFF thinks that Everton have done excellent business so far in this transfer window.

Morgan Schneiderlin was possibly the best available Premier League player in the window and it wasn’t just Everton that wanted him.

This signing made sense in so many ways. This is a French international and a player who will go straight into the strongest Everton XI. Not only that but Ronald Koeman has had the pleasure of working working with Schneiderlin before. There will be no getting to know you period. The Dutchman knows his game and knows what makes him tick.

And in Ademola Lookman Everton seem to have signed far more than just cover for the crocked Yannick Bolasie. The ex-Chartlon man has frightening pace and decent composure for one so young. And he has that natural eye for goal that so many wingers lack.

So TFF would like to see both thrown in from the start against Stoke. Scheniderlin’s place seems assured and Lookman will offer the sort of pace on the counter which could trouble any home team.

The injury list is short with only Bolasie and Besic crocked from the first teamers.

So, with new faces and improved form over the last month Ronald Koeman will be looking to get his Everton side to push on in the final third of the season and that will mean three points against a mid-panel Stoke side which has had a mercurial season. 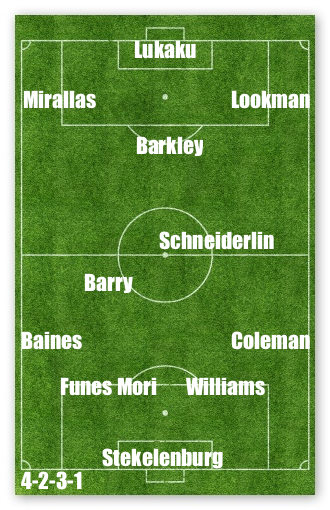