Manchester United and Arsenal have, down the years, been the best possible adverts for The Premier League.

With their buccaneering styles, attacking systems and superstar players they have both tended to approach the game with entertaining philosophies.

For the first time since Arsenal won the league without losing a game over a decade ago, they come to Old Trafford with a team that looks far more complete than that of Manchester United under Jose Mourinho.

But we can see this one turning into a scrap. And Manchester United regularly win those sort of tussles between the sides.

LISTEN TO AN IN-DEPTH PREVIEW OF MANCHESTER UNITED VS ARSENAL

Antonio Valencia could make a shock return to the side after just three games out with a fractured arm which required surgery.

Many Manchester United fans will be relieved to hear that Marouane Fellaini is injured. Chris Smalling and Eric Bailly are also out and Zlatan is serving a one match suspension.

TFF senses that, having worked beautifully against Swansea, Manchester United may stick with a 5-3-2 formation which employs the speed of wing backs such as Luke Shaw and Ashley Young. This would give Manchester United width while also keeping them compact against a brilliant Arsenal attack. With Smalling and Bailly out, three at the back may be the safest option.

In the absence of Hector Bellerin Manchester United must surely use the pace of Rashford or Martial on the left of the attack. 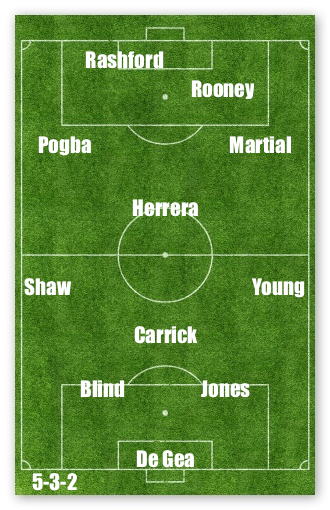 Arsenal have injury concerns over Alexis Sanchez but he did play 84 minutes for his country in the week – albeit with a heavily strapped leg. Hector Bellerin and Santo Cazorla are both crocked and Lucas Perez is also out.

TFF believes that Sanchez will start this one but Arsenal will be noticeably weaker without the guile of Cazorla in midfield and the pace of Bellerin on the right flank.