After another really good performance in Europe against Ukrainian opposition on Thursday night Jose Mourinho may be somewhat undecided about whether his best formation is 4-3-3 or 4-2-3-1.

The latter formation allows more width, but a 4-3-3 gives the manager the option of squeezing the likes of Herrera, Mata and Pogba into the midfield.

When all three play Manchester United tend to keep excellent possession of the football.

But TFF has always been a huge fan of Anthony Martial and we strongly believe he should be playing in this crunch game of the weekend. Manchester United have dropped far too many points of late but they absolutely must get three points in this game because they’re playing rivals for that fourth Champions League spot.

A win at Old Trafford on Sunday will pull Manchester United within three points of Tottenham but a draw or loss and the north London side will be almost out of sight.

In terms of injuries things are looking pretty good for United right now. Luke Shaw may return from a knock and, apart from that, only Chris Smalling and James Wilson are sidelined.

Tottenham have recovered some of that zest from last season of late and they will be very tough opponents but TFF is going for a Manchester United win by the odd goal.

We think that United’s main man for the last decade, Wayne Rooney, has forced his way back into the reckoning after some much more spritely recent performances.

So this is what we believe to be the best XI for the game. Manchester United fans – is this now United strongest team? 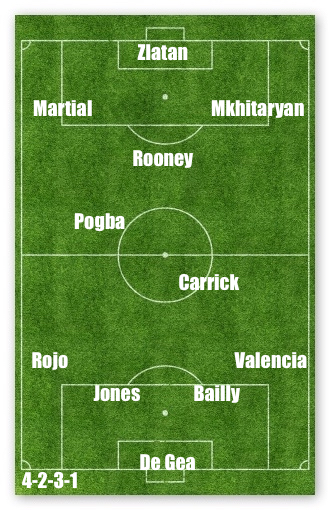