Perhaps we football lovers fool ourselves into thinking that every new season is particularly special.

But it does seem that, this year, The Premier League has been seriously revamped.

Not least because Jose has joined Manchester United and brought with him four players who genuinely look like United calibre.

The last few years has been a turgid affair and, Luke Shaw and Anthony Martial apart, you could sell virtually every other signing without noticeably losing quality from the side. Because when you add Shaw and Martial to the long-term United players – Carrick, De Gea, Rooney, Smalling, Valencia – and then include Bailly, Pogba, Zlatan and Mkhitaryan, you have United’s strongest XI.

It’s mad to think that a quarter of a billion was spent on players who simply haven’t made any impression. Depay, Di Maria, Blind, Schneiderlin, Rojo, Schweinsteiger, Mata, Fellaini – the embarrassing list of overpriced underwhelmers just goes on and on.

And we expect the latest recruits to have a far bigger impact. The Right One has had six months to scheme. To seethe. And to plan his next great team. He probably knew in the spring that he wanted these four guys if he came to Manchester United.

And he has bought 4 players who will undoubtedly improve the first XI rather than just furnish an already huge squad.

The big question on the lips this weekend was whether we would see anything of the world record signing Paul Pogba. He only completed his move at the start of the week and that meant just 3-4 days of training.

But Mourinho dropped the bombshell that the player is still suspended due to a couple of yellow cards in last season’s Coppa Italia and will likely make his bow in the more grand surroundings of Old Trafford next week. On this subject Jose said:

“I knew the situation with the yellow cards. But I didn’t know at that time if an accumulation of yellows would bring a player to suspension, or that one in Italian football would be one for the corresponding competition in England which would be an FA Cup match. I found out two days ago.”

So, with that in mind, here is how we think Manchester United will line up against Bournemouth. And we simply can’t wait.

United fans: is this your XI? 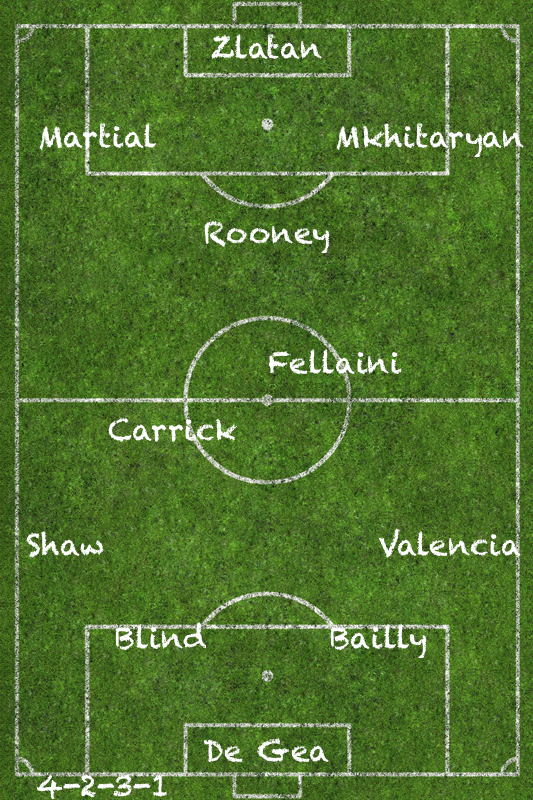