Manchester United will probably be more pleased than Liverpool after a tense 0-0 draw at Anfield on Monday night.

While United did have a couple of good chances – most notably Zlatan’s unusually poor header from a wonderful Pogba cross in the second half – they were probably content to leave with a point considering what a big week they have.

They travel to Chelsea on Sunday in what will be an emotionally charged afternoon for Jose Mourinho.

And before that they have a must win game against Fenerbahce.

Although Jose possibly hasn’t got his strongest XI together yet there is no doubt that he has a very deep squad.

And we should expect him to utilise that depth on Thursday and still put a great team out.

Surely the likes of Juan Mata and Jesse Lingard will play. Michael Carrick and Morgan Schneiderlin will also be desperate for game time. And if Henrikh Mkhitaryan is fit he should expect to start. Perhaps Anthony Martial will be saved for the weekend.

We should also see a return to action for Wayne Rooney, probably at number 9 to give Zlatan a rest ahead of the crunch Premier League game at Chelsea.

So it will be a much changed line up for a game that Manchester United surely must win if they want to strengthen their position in the group and give themselves a healthy chance of qualifying. A 1-0 win last time, twinned with a win on Thursday and United will be in the driving seat again before their return match against Fenerbahce in the next round of fixtures.

Here’s our XI for the game. Manchester United fans: is this team strong enough to take the points? 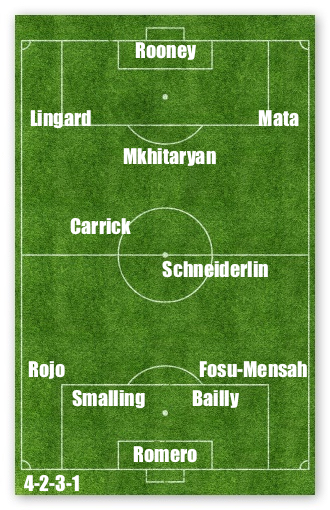