Just so you know how TFF feels about this one from the off, we are expecting Jose Mourinho to be at his Machiavellian best this weekend. He won’t give a monkey’s about scoring loads of goals or putting on a swashbuckling and free flowing performance.

Of course, that would be a bonus, but it will be way down his list of priorities – a list which will undoubtedly have ‘3 points’ at the top in bold and underlined twice.

A 1-0 win, which gives Manchester United a clear advantage over their main rivals in the table, will be seen as a job perfectly done by The Right One.

In fact he may look to stifle the flow of the game from the off. Because we have seen Manchester City starting the season like a train. Meanwhile, Manchester United have won all three of their opening league fixtures but have looked workmanlike and still have a long way to go before all the new boys bed in and Jose’s directives are completely understood.

But Manchester City are already playing with almost reckless abandon and scoring goals for fun. Jose will want to keep this one tight and limit the opportunities for the opponent to play football.

And we feel that the loss of Sergio Aguero to suspension will be a big factor in this Manchester derby. Manchester United fans have been shooting him envious glances for years. But his form seems, improbably, to have gone up yet another notch this season under Pep. He’s a frightening marksman who can make defenders look as if they are playing the game in slo-mo. But let’s not forget the qualities of his likely replacement Kelechi Iheanacho who, at just 19, is already a superb footballer.

While the purists among us still sink into our chairs a little when the big Belgian is on the team sheet, Jose will hope that Marouane Fellaini is fit for this one to execute his stifling plan to perfection.

While he, Henrikh Mkhitaryan and Luke Shaw are all close to a return to fitness after minor injuries it will be touch and go whether they make the team.

If Fellaini and Shaw are fit they will play but we would love to see Carrick get a game behind Pogba and we would also like to see Marcus Rashford start on the right. It is crazy that his pace isn’t being used in a team which isn’t blessed with it.

Meanwhile, the likes of Antonio Valencia and Marcos Rojo are returning late from international duty so perhaps we will see a first start of the campaign for Phil Jones. Despite the widespread criticism of the player, we still think he can be an able right back or centre back for United.

So here is TFF’s strongest XI for the big one, fitness permitting.

United fans: thoughts on the line up? 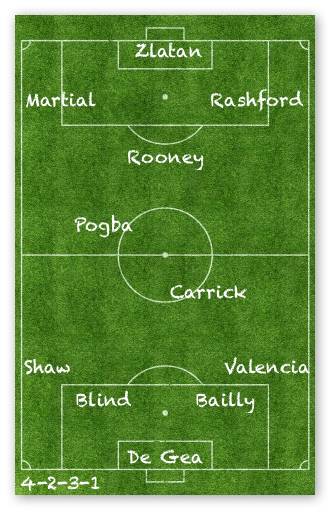