Manchester United won their first trophy of the season at Wembley on Sunday and, while other silverware looms large, the chances are that they won’t be following that up with a league title this May.

Manchester United started the season slowly and took time to integrate four players who have all turned out to be super additions to the squad.

Of those newcomers Henrikh Mkhitaryan took the longest to bed in but has proven his worth of late and is seen by some as the star man in the Manchester United line up.

But his place in the team continues to be in doubt due to a hamstring strain picked up in the Europa League.

TFF thinks that it’s time to see Martial and Rashford start in the wide areas against Bournemouth in the early kick off this Saturday.

They didn’t dovetail too successfully when they were first started together earlier in the season. But both have improved as the campaign has progressed and, in the absence of Mkhitaryan, the prospect of using the raw pace of the due alongside Zlatan is truly tantalising.

Jesse Lingard will be hoping to get another chance after scoring the second at Wembley, but TFF is far more keen on the skill set of Rashford.

Phil Jones is the only other major doubt and he has a chance of making the squad for this one.

So here is our suggested XI for Jose Mourinho to field to give Manchester United the teeth in attack to make this another three valuable points. 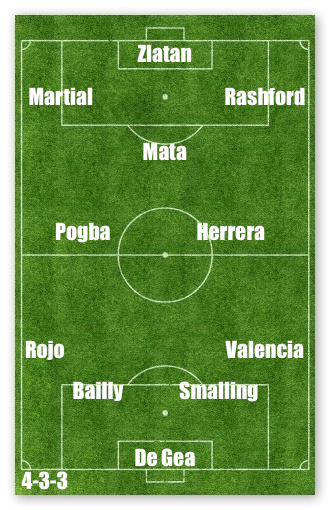