Manchester United have made hard work of many home games this season. And the weekend fixture against West Brom once more illustrated the point that they lack cutting edge up top.

With Rooney blunted and Zlatan suspended the goals just wouldn’t come despite Manchester United’s utter dominance of a one-sided fixture at Old Trafford on Saturday.

And the game against Everton won’t be any easier. But they can count once more on the considerable talents of leading scorer and talisman Zlatan Ibrahimovic for a crucial game.

Manchester United are running out of time to catch up with the top four and it’s their home form which has been an Achilles Heel this term with eight draws in 15 outings at Old Trafford.

Manchester United look more solid than at any time since Sir Alex but they don’t currently have the cutting edge of a truly elite side.

But the returns of Ander Herrera and Zlatan will bring composure and creativity to the side against a well-drilled Everton team.

Phil Jones, Chris Smalling and Paul Pogba are expected to miss this one through injury as well as Juan Mata, who recently underwent surgery.

But this is a big squad and Manchester United have more than enough quality to trouble Everton.

One element of the line up which has flummoxed many this season is the lack of consistent game time afforded to Anthony Martial. He played against WBA at the weekend but remains a shadow of the player who bewitched opponents on a weekly basis last season.

Jose Mourinho’s man management has been excellent at Old Trafford and TFF hopes that he can eventually bring the very best out of Manchester United’s best player.

So here is how we think Manchester United should line up with those key injuries in mind. United fans – let’s have your thoughts. 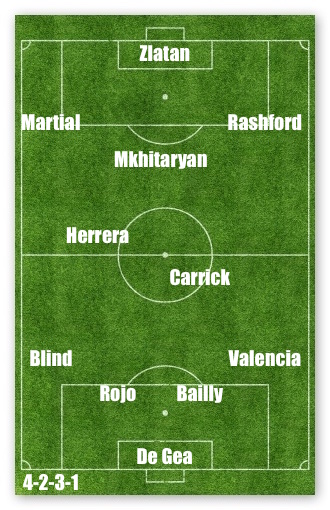