Manchester United have hit the ground running and Jose Mourinho will be delighted that he’s taken 6 points from the opening two games.

The bad news is that the other major players have also recorded back to back wins. We could be about to see a very high scoring Premier League title race.

So a win at Hull is vital to go into the international break with the feel good factor intact and apace with the competition.

Manchester United certainly haven’t been at their free flowing best so far this season but that will come with time. There is already lots of evidence of improvement from last season and the addition of Paul Pogba last Friday night gave United the look of a team who can beat anyone.

So will Jose make changes for the visit to high flying Hull this weekend?

We believe that there are two areas of interest. Firstly at right midfield. Juan Mata was quiet on Friday and Henrikh Mkhitaryan gave a pacy and impressive cameo when he came on. Perhaps it’s his time to shine?

In the centre of defence Daley Blind and Eric Bailly have been solid but Chris Smalling saw some minutes against Southampton and TFF thinks he may start.

Other than that it’s as you were and we are expecting to see a battling performance and a win a la Bournemouth in the opening game.

So here’s what TFF believes is the strongest XI for this one. Manchester United supporters: what are your thoughts? 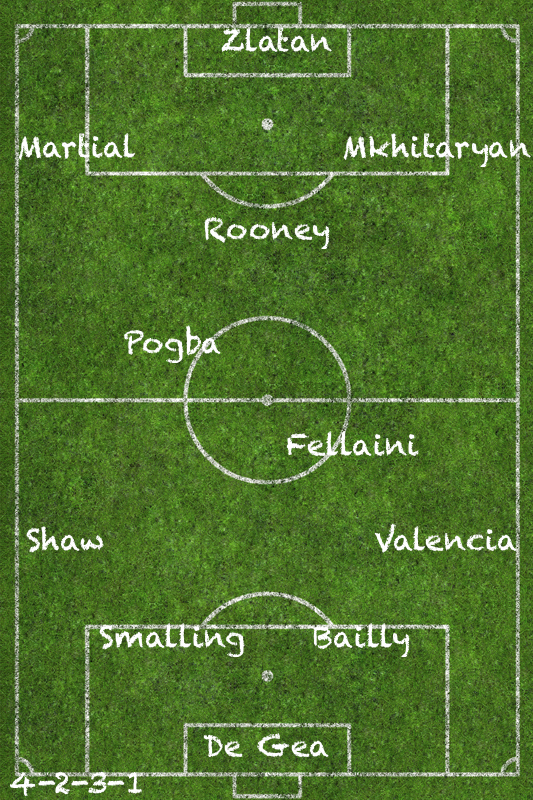