If Manchester United’s Fergieesque, clinical display against Bournemouth was a reassuring start to the Jose Mourinho era, the absence of Paul Pogba through suspension was something of a let down.

But it does seem more fitting that he should begin his Manchester United career for the second time under the lights at Old Trafford this Friday evening (Kick Off 20:00 BST).

Firstly the injury news and unless Jose has more news for us in his midweek press conference then it appears that only Jesse Lingard is currently struggling.

Chris Smalling is almost back to full fitness but his pre-season injury couldn’t have come at a word time. In his absence Daley Blind and Eric Bailly have formed a highly promising partnership and the England man may find himself down the pecking order at the start of this campaign. But, as Jose reminded us all, September brings Europa League, The League Cup and the tedious international qualifiers, which will all stretch the squad.

For now, however, the back five looks very settled and TFF is sticking with it vs Southampton.

With Rooney, Zlatan and Martial all sure to start, fitness permitting, the only really questions are who plays on the right and who makes way for the expected but of the The Big Man.

Juan Mata may feel as if he deserves to keep his place in the side after a goalscoring start at the weekend. TFF still thinks he is ill-suited to the wide role but he did float about and drift infield a lot against Bournemouth – indeed his goal was scored from the inside left position.

Ultimately we would like to see Henrikh Mhhitaryan find his feet out right however and perhaps this will be his moment.

In midfield Manchester United have loads of options and perhaps Jose doesn’t even know his strongest combination. What we do know is that it’s going to be Pogba plus one moving forward.

So here is our XI for a hugely anticipated game with Pogba hopefully making his debut. United fans: discuss 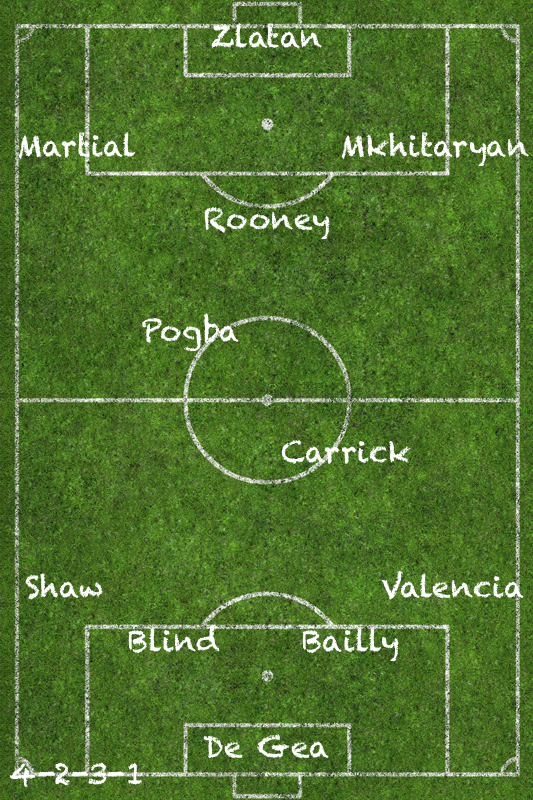