This will be another great test for Arsenal to gauge where they are in terms of their title credentials.

Because, in times past, Manchester United have regularly bullied Arsenal at Old Trafford – not allowing them to play their free-flowing game and regularly taking the points as a consequence.

LISTEN TO OUR IN-DEPTH PREVIEW OF MANCHESTER UNITED VS ARSENAL

And with Jose Mourinho at the helm we should perhaps expect more of the same this weekend in the early kick off.

But Arsenal are flying and if their big hitters return from international duty in good shape they will have as good a chance as ever to dismantle a hitherto fragile United which is still looking for its best team.

Arsenal are far more settled and will hope that Alexis Sanchez is fit for the game. He’s been on fire but has been carrying a muscle pull and Arsene Wenger will be watching on nervously as the star trains with the Chile squad this week.

Hector Bellerin looks certain to miss the game and will be big loss. Lucas Perez won’t make it and Santi Cazorla looks doubtful. So there are some key absentees and Arsenal’s hopes for three points could rest on the availability of Sanchez.

The Gunners do still have enough to take this one. They not only have a deeper squad than at any time in recent memory but also look tougher to break down with the likes of Coquelin and Xhaka in the ranks.

It’s the game of the weekend and looks set to generate fireworks, however it turns out.

Here’s TFF’s line up. Arsenal fans: is this the best team you can put out? And who would you deploy at right back? 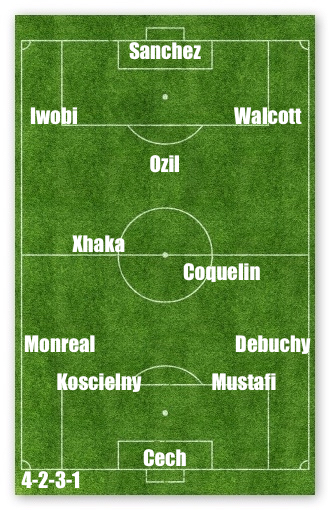