Supporting Manchester United is seemingly harder than at any time in a quarter of a century as the success-laden fans of the club come to terms with a team which seems to have completely lost its consistency.

You genuinely don’t know what you are going to get from this lot right now. Even the boss, Jose Mourinho, isn’t himself as he continues to be isolated from his beloved family.

A midweek victory over Manchester City – a albeit a weakened City side – will have warmed the hearts of a crowd who have remained impressively boisterous despite the uncertainty.

And Jose can build on this if he starts to stick with more of a settled Manchester United team instead of constantly tinkering with his squad of considerable if disjointed talents.

Marcus Rashford continues to offer a threat even when the rest are playing poorly and he needs to stay in the team and see more of the ball. He took a knock on Wednesday but has a chance of playing.

Quite why Anthony Martial isn’t playing is anyone’s guess. He was our man of the season for Manchester United last term with 17 goals and 11 assists but we did fear for his future when Jose came in. The Portuguese loves his wide men to track back and that’s not really Martial’s forte.

But the wider problem is a lack of real threat going forward and we still think that a front line of Rashford, Zlatan and Martial is easily the best combination at the club right now.

So here’s our Manchester United XI to beat Burnley with Marcus Rojo keeping his place ahead of Chris Smalling. 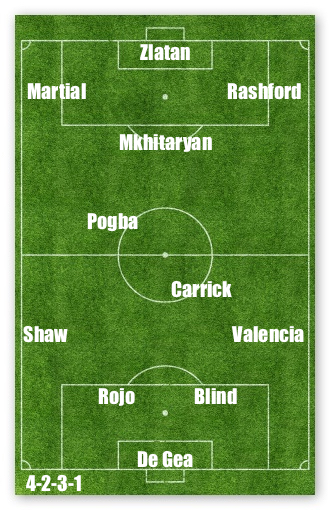