It may sound silly to suggest that this is a make or break tie for Arsenal. But it could well provide a perfect gauge of where they are right now.

Because a lacklustre performance last weekend lead the doubters to assume that little has changed with Arsene Wenger’s squad this season – that while they are capable of stunning performances they lack the grit to take three points when they aren’t at their best.

And if Arsenal could play any side in the division right now, on form, they would surely take Sunderland or Hull. But at least Hull look look like scoring from time to time. With The Black Cats, they are so reliant on Jermaine Defoe that it’s becoming increasingly easy to mark him out of the game by doubling up.

So Arsenal should cuff David Moyes’s side with time to spare. But, against a team who will fight for their lives, the big question is which Arsenal will turn up?

Suffice to say that if they can’t take the points in the early kick off on Saturday, TFF will continue to have grave concerns about whether they can sustain a title challenge all the way through until May.

In terms of injuries, we know that Perez, Akpom, Mertesacker and Welbeck are out. Theo Walcott, Nacho Montreal and Santi Cazorla will all have late fitness tests and how Arsenal could use all three for this one.

So here’s our optimistic XI. Arsenal fans: is this the side to dismantle The Black Cats? 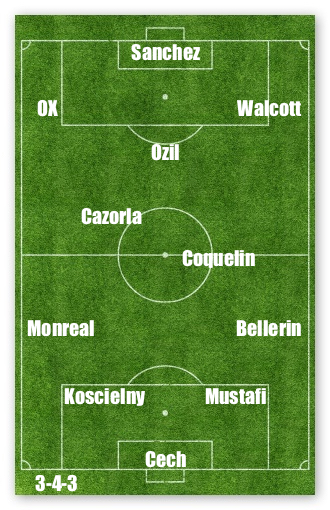