Manchester United have again been linked with the not unsubstantial talents of Toni Kroos and Raphael Varane over the last few days and it’s easy to see why.

Because while Manchester United are much improved this season they are still a work in progress.

In defence they have signed the brilliant Eric Bailly and have some good players to partner him. But TFF senses that a really pacy player would be the perfect complement for him at the heart of the back line. While Chris Smalling is fast he isn’t always the best with the ball at his feet.

Not so Varane who is pacy and elegant with his distribution. The French international is an excellent player in the Rio Ferdinand mould.

As for Kroos his talents are obvious. He is a wonderful defensive midfielder – a great passer and reader of the game – and he would surely be the perfect replacement for Michael Carrick. Carrick has been a sensation at Manchester United but, at 35, his powers are starting to wane.

The German is a guaranteed starter for his country and was part of the victorious 2014 World Cup winning side in Brazil which famously hammered the hosts in the semi-finals.

Add another world class and pacy striker to that side and Manchester United would have to be considered one of the strongest teams in Europe once more.

So here is an XI with the talents of Kroos and Varane added. Manchester United fans: are there many better teams in Europe on paper? 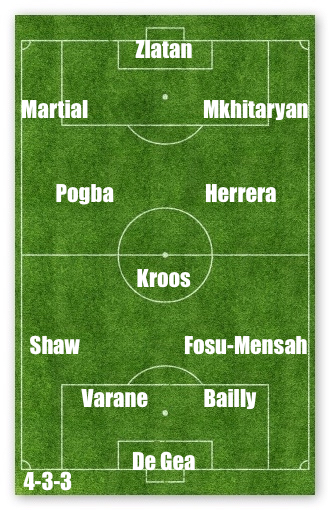