Tottenham manager Mauricio Pochettino says that there is a very small chance of Spurs doing any more business in the January transfer window ahead of his side’s midweek trip to Sunderland. His exact projection was that there was ‘0.01%’ chance of signing another player before the end of this window.

But his side are on form and playing the best football of their season so far. What’s more, latecomers to the party, such as Moussa Sissoko are starting to finally to look comfortable on the big stage.

But Sunderland made a couple of decent signings of their own this week in the shape of Everton’s Bryan Oviedo and Darron Gibson – average signings in the eyes of some but it could give the team and fans the requisite lift ahead of thier latest battle to avoid relegation.

So, despite the fact that Tottenham have once more found their ruthless streak, TFF isn’t so sure that this is going to be a straightforward victory for the Londoners. Sunderland have been limp of large swathes of the season but they are still capable of rousing performances and David Moyes makes them hard to break down. And wouldn’t it just be typical of Jermaine Defoe to pop up and score a crucial goal against the side where he played out his best years.

That said, Defoe looks as sharp as ever and he will need to be marshalled well to avoid embarrassment.

Tottenham do have a few injury concerns going in to this one and will sincerely hope that the likes of Harry Kane, Toby Alderweireld and Danny Rose recover from injury to take their place in the starting line up.

Jan Vertonghen and the long suffering Erik Lamela are likely to miss this one and Keiran Trippier is also struggling with a hip problem.

So here’s our predicted XI in what could be a tight encounter.

Tottenham fans: is this the side to get past a stubborn Sunderland? 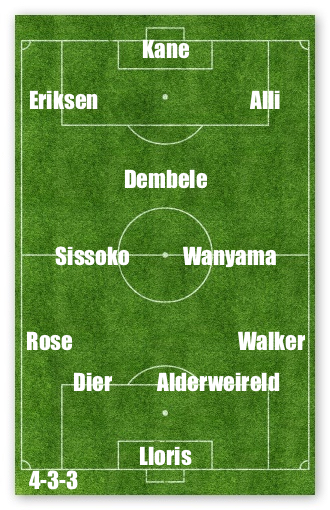