Tottenham go into the game against Bayer Leverkusen on Wednesday night on the back of four uninspiring draws and a defeat in their last five games.

They can be thankful that, in The Premier League, other rivals have stuttered too in this period.

But, in Europe, they can’t afford too many more unremarkable performances with the business end of qualification coming over the horizon. With the German side breathing down their necks in Champions League Group E Tottenham really need to take three points in this one if they want to keep their destiny firmly in their own hands and avoid a frightening finale to qualification for the last 16 of the biggest club competition in the world.

Because with a trip to Monaco to come, anything less than a win could see Spurs drop to third place by the time they return to North London for their final game against CSKA.

The good news is that Harry Kane could be fit to face Arsenal at the weekend. But it’s not probable that he will start this one and the same goes for Toby Alderweireld.

But Erik Lamela should return after illness and how Tottenham could use the speed and guile of him on top form this midweek.

TFF feels that a good win against a tidy German outfit will set Tottenham up nicely for their massive encounter against Arsenal at the weekend which our podcast suggests Spurs could win.

So here’s a strong looking Spurs side with one eye on the derby.

Tottenham fans: will you take the points on Wednesday? 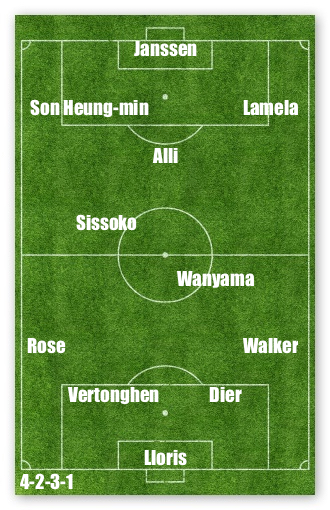