Tottenham’s results and performances have been average of late. Is it too early to suggest that Mauricio Pochettino’s high octane style of play is impossible to maintain twice a week?

Perhaps this should instead be viewed as the sort of period of average form which every team suffers in a long season. And the good news is that Spurs have avoided defeats through this flock of tough fixtures.

Another one awaits them this week at Anfield and although the league cup is the priority of neither club, the feel good factor that will come from a win against a title rival should not be understated.

On paper it looks like the tie of the round. Because although there is the not inconsiderable Manchester derby taking place this week too, Liverpool vs Tottenham could well provide the best spectacle.

The idea is that both will go for the jugular. Both play a similar pressing style of football and it will be fascinating to see who blinks first.

An early goal could lead to a classic and it’s a very difficult one to predict. Liverpool are generally fearsome at Anfield these days and will attack from all angles.

But Pochettino is a brave coach and we expect a brave line up which will attempt to get Tottenham on the front foot from the off.

Toby Alderweireld and Harry Kane are still out injured but, other than that, it’s a fit squad.

Here is how we think Tottenham will line up with a home game against Leicester to come at the weekend and just a couple of tweaks from the strongest available XI.

Tottenham fans: how strong a team do you think MauPo will pick? 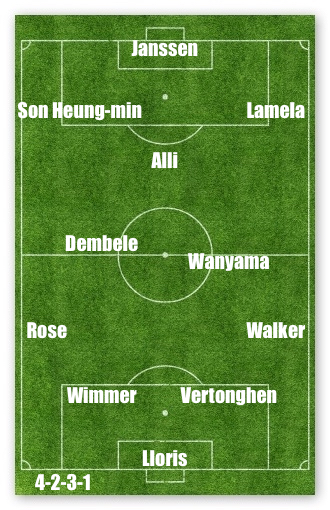