Tottenham were one of those clubs who had lots of money still to spend on the last day of the window. And spend it they did with the £29.75m transfer of Moussa Sissoko to further strengthen a midfield which already boasts Eric Dier, Moussa Dembele and fellow new signing Victor Wanyama.

Tottenham do now seem overloaded in there and perhaps we are likely to see a 4-3-3 from this point. An alternative theory is that, in a fiercely competitive market, Tottenham manager Mauricio Pochettino has simply bought the best players that he can get his hands on, with less emphasis in their playing position.

Unless Eriksen or Alli is sacrificed then two of those four midfielders will have to sit out lots of games.

It’s a fascinating conundrum but, despite wildly varying opinions about the Frenchman, we are fans of Sissoko. He brings power and more drive to the midfield than either Dier or Wanyama offer. He can also operate in a more advanced position and wider if necessary.

Vincent Janssen also looks like a good purchase and has done himself no harm at all with a couple of all-action displays for Spurs already this season. But he may have to be patient too at this stage.

With a settled defence Tottenham have a wonderful platform to kick on this season and we will also monitor the form of young winger Georges-Kevin N’Koudou with great interest.

With all that in mind, here is TFF’s strongest Spurs XI with the window now closed. Tottenham fans: your thoughts? 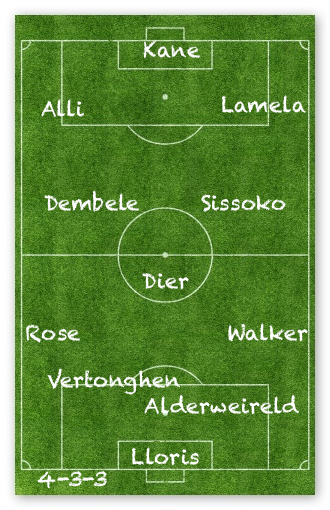